Who is behind Antipole?
Antipole is me, Karl Morten Dahl (Trondheim, Norway). I started this in 2014 as a solo project. Now I’m working with other artists in the genre, mostly with Paris Alexander and Eirene (Brighton, UK). I’m also working with Kill Shelter, IAMTHESHADOW and others. So it would be correct to say that today most of the time Antipole is me with Paris Alexander and Eirene – which is also the live setup. We’re not a conventional band since we’re located in different countries. I was working with Paris and Eirene on the Northern Flux album (Unknown Pleasures Records, 2017) and I am also working with them on the upcoming album coming out later this year.

If you had to put your music into a drawer and print a label on it, what would it say?
Ethereal postpunk. As with most bands one label wouldn’t be enough of course. I am inspired by a lot of electronic coldwave and it’s a label that would fit some of our songs, but not all.

Forget about genres for a second – Antipole’s music sounds like …?
A different place and time. There is no scene for this kind of music in Norway really so guess it’s also literally correct. But there’s a scene out there – which we care about.

Which sort of mood produces the best songs?
The cliche would be to say sadness. But I’ve found that the best songs tend to be written when I’m enthusiastic or hopeful. But we aim for the combination of melancholy/sadness/cold and hope/energy/warmth.

Which instrument will surely NEVER be heard on an Antipole-album?
Acoustic guitar for sure. We have a rule: never play chords. So you won’t hear guitar chords either.

Which record would you want to listen to when you leave the bathroom in the morning, while the beautiful girl from last night is still in your bed?
The girl will certainly be my girlfriend Anne-Christel and I would jump and dance out of the bathroom listening to Another Day Without Blue by Geometric Vision. Ready for whatever comes. That said, not all days are without blue.

The Fairy-Godmother pops up in front of you and grants you a wish. What do you wish for?
We did three live shows in 2018. I would wish for many more Antipole live shows with Paris Alexander and Eirene in the future. Had an amazing time at W festival (Belgium) and Synth Wave Live (UK). Performing, meeting dedicated people into the same music as we are. Wonderful.

No alcohol is no solution either. What booze combination will definitely dissolve all your troubles and issues?
Alcohol is rarely a solution, but I love having a couple of beers at gigs.

What shows you that someone is a true friend?
Someone initiating contact regularly or not so regularly. Most important is that you can share your inner thoughts with them, even though it’s been a while since the last time we met. 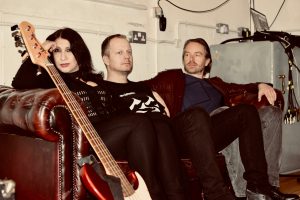 Who was the hero of your childhood?
I don’t know if I had one hero in my childhood, probably multiple. In my formal years Kurt Cobain was kind of a hero. I listened to whatever music he recommended. And found a lot of great bands this way. Later I found the bands myself most of the time.

What is the most embarrassing/surprising record in your CD-shelf?
Haha, many I guess. Probably Europe – „The Final Countdown“ on LP. Bought in 1986 or something. Definitely before I even knew what postpunk or indie music was.

What’s next? Tour? Studio? Vacation? Something completely different?
We did many remixes of other artists in 2018 (Agent Side Grinder, Hante., IAMTHESHADOW, In Letter Form and more) and will do a few more remixes (Buzz Kull and Silent Runners coming up). In 2019 we will definitely do fewer remixes and focus more on our own music. Right now we’re finishing the next album – again me with Paris Alexander and Eirene. It will be released on Unknown Pleasures Records May-ish and will also feature Marc Lewis from The Snake Corpse. I will also do 2 live shows with IAMTHESHADOW (Portugal). Darker Days Festival in Leicester, UK in March and Cold Transmission Festival in Cologne, Germany in July. We (Antipole with Paris Alexander and Eirene) don’t have a tour scheduled but hopefully we’ll do some Antipole shows too.