If you had to put your music into a drawer and print a label on it, what would it say?
The label would say „Diary“, because the contents are quite personal and close to the heart.

How would you describe the sound of Darkhaus to a deaf person?
Similar to how life’s milestones and events produce an emotional response, the music of Darkhaus can be described as a conductor of raw human emotion via sound and stage.

Which sort of panic creates the best songs?
Real life situations make for the best songs. By having a sense of maturity and mortality and via possessing the gift of empathy and humility, there within lies the perfect opportunity as a songwriter to connect with others who possess similar qualities.

Which instrument will surely NEVER be heard on a Darkhaus-album?
Never say never. I think each of us certainly has his own preferences and dislikes for certain instruments, but if a song calls out for a certain instrument to be used (no matter how brash), I think we would go for it quite open mindedly.

Which record would you want to listen to when you leave the bathroom in the morning, while the beautiful girl from last night is still in your bed?
Chris Rea: „Wired to the Moon“. A timeless classic.

Which song would you be proud of, had you written it?
„Praying for Time“ by George Michael. 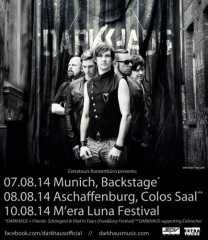 No alcohol is surely NOT the answer – after which combination of booze all your problems will have dissolved?
I prefer Single Malt Whisky, aka Laphroaig, Ardbeg, Scapa, Highland Park, etc… Since alcohol is a depressant, it can be a useful writing tool… but only if consumed in moderation. If not, it can certainly create a host of other problems, and I speak from experience.

What shows you a true friend?
Someone who stays with you through life’s ups and downs. Someone who shines when it’s time to shine, and those moments are few.

Who was the hero of your childhood?
My father was my greatest inspiration in life moving forward. He was a world renowned writer, music aficionado, and a man of great intellect and wisdom. My mom has also been a hero to me in many ways. She is a real life super woman.

Are we alone out there?
I don’t think we are alone. Perhaps we are arrogant to sometimes suggest it because the universe is so vast. I sometimes ponder if we humans are alien to this earth because of our track record of disharmony with it and the rest of its inhabitants.

What’s next? Tour? Studio? Vacation? Something completely different?
We have several more tour dates coming up with Subway To Sally (a wonderful band) starting this Thursday in Berlin. This August, we will appear at M’era Luna Festival with many great artists. Perhaps some vacation time in between (would be nice). For more info and updates, visit us at darkhausmusic.com and at Darkhaus Official on Facebook

Thank you for this interview and thanks to our awesome fans for supporting Darkhaus!