Who is behind Delta Enigma?
Delta Enigma was formed by the singer/songwriter Vin Valentino and the rhythm guitarist Julian Rose. The rest of the members are the lead guitarist Sammy Black, the bassist Tommy Demon and the drummer Eddie X.

If you had to put your music into a drawer and print a label on it, what would it say?
I guess it would say “Heart“ and on top of that would be a sticker that says: “Fragile, handle with care.”

Which sort of mood produces the best songs?
The golden mean somewhere between sorrow and happiness.

Which instrument will surely NEVER be heard on a Delta Enigma-album?
Bagpipes. Nothing against the instrument itself though. It just wouldn’t fit our style.

Which record would you want to listen to when you leave the bathroom in the morning, while the beautiful girl/handsome boy from last night is still in your bed?
Vin: Billy Idol – Rebel Yell

The Fairy-Godmother pops up in front of you and grants you a wish. What do you wish for?
Nothing. I want to reach my dreams with fair play. I like challenges.

No alcohol is no solution either. What booze combination will definitely dissolve all your troubles and issues?
Kyrö Napue Gin & Tonic. Perfection.

What shows you that someone is a true friend?
If you can hang out with a certain people for years and years without getting bored then you can safely call them true friends. 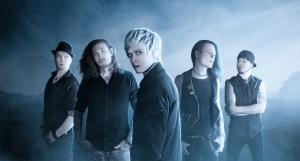 Who was the hero of your childhood?
Spyro the Dragon.

What is the most embarrassing/surprising record in your CD-shelf?
They are all awesome!

What’s next? Tour? Studio? Vacation? Something completely different?
We are working on new music videos „Unreality“ and „Venom“ and a debut album Two Shadows. The album is scheduled to release by the end of 2020. We will also arrange a livestream event in August. A special guest from the band Melba Culp (USA) will join the event with us.