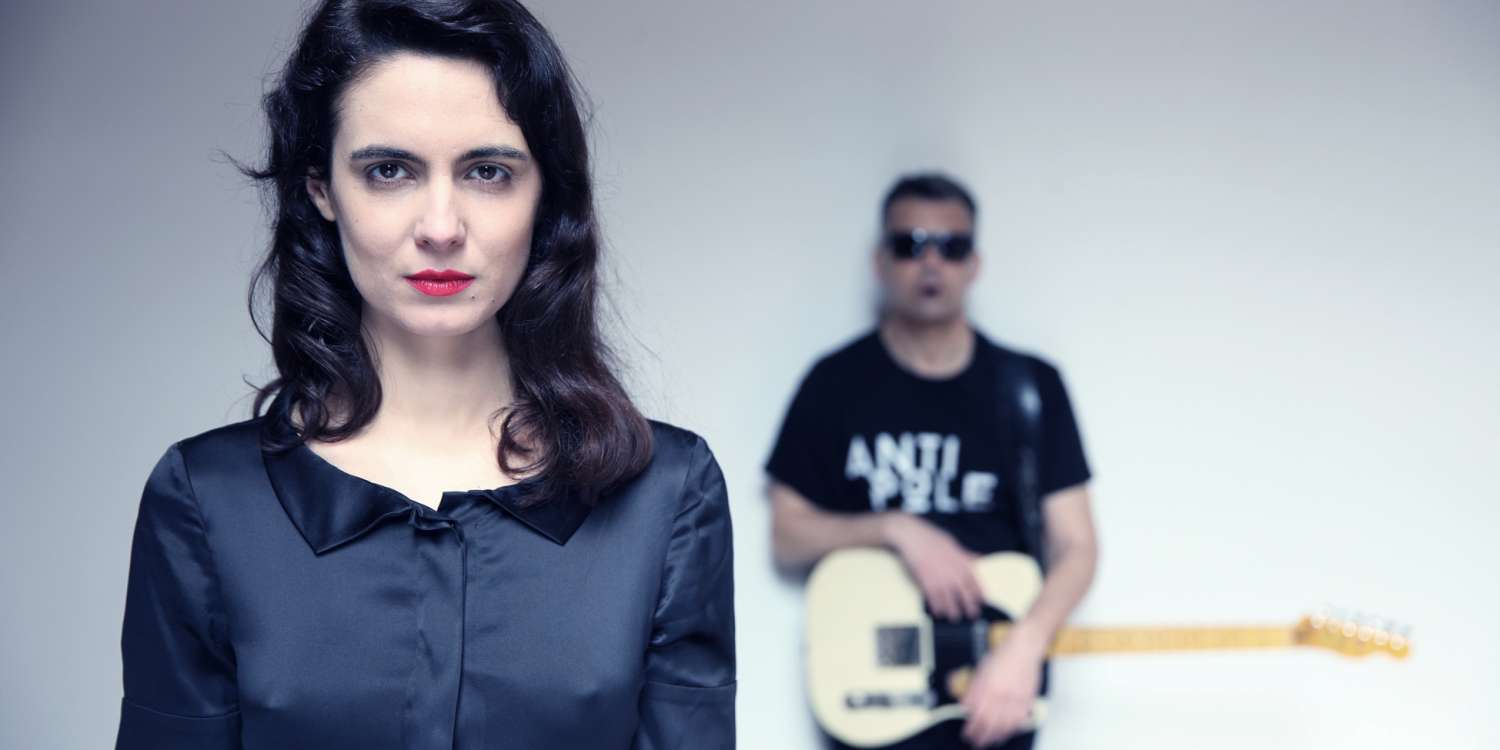 How did the project come into being? What made you decide to start Echoberyl?
Adriano: First of all, thank you for this interview, for the opportunity you give us to talk about us. Germany is the most important European country for us, in terms of fans and support for our work.
Echoberyl is the result of a series of incredible coincidences, like those you see in movies, I’m not kidding. I had posted an ad on a musicians‘ site to find a singer, male or female, it didn’t matter to me. I had some good songs and I wanted to start a duo or a trio to propose them to some labels. I met Cecilia in February 2018. We played Tainted Love by Soft Cell and a song by Depeche Mode, I think. She was explosive. Talent, personality, great look, everything. But, above all, once the microphone was turned off, Cecilia was a normal girl. In the past I had played in a very good industrial band in London. There were five of us, I loved them all, we had a great time together, great gigs, great fans. We were so close to be rockstars. But three of them were heavily, sadly involved in drugs. Working together was a nightmare. Never got to a record deal. In London I worked as an assistant in a studio where the likes of Tanita Tikaram, Jimmy Sommerville (at the end of his career, I must admit) and others were recording. I even played guitar for Eddie Vedder one day! But I couldn’t establish myself as an author. Working with rock stars didn’t help at all.
Once in Paris, I needed normality. Cecilia was perfect. Then I had an accident that blocked me for months, and I lost the phone with all the numbers. I met Cecilia again by chance, eight months later. We immediately started writing the first album together.

How did your band name come about, and what does it mean to you?
We were looking for some original name, easy to find on Google. We came out with this one. A flower from an alien planet, a resonant crystal, stuff like that.

Can you tell us a few things about the connection between you two and your journey into the music?
We have the same passions, we almost always agree, we never fight and, above all, we have the same desire to work hard, to improve, to progress, to tell good stories.

If you had to describe your music in terms of not music … what would you say?
Cecilia: My imagery is mostly cinematic, so I think of sounds that describe characters from horror or mystery films. I imagine their fluffy or tight clothes, their expressions, their movements in the frame of my mental camera.
Adriano: It helps me a lot to think about music visually. Someone who whispers then explodes, or a landscape that suddenly changes and no longer looks the same, or a thread of spider web colored, for some imponderable reason, of yellow spray.

What are your first musical memories? When did you first fall in love with sound?
Cecilia: When I was a child, I was a fan of a French synthpop singer named Alizée. I was also influenced by the music my mother listened to: Mylene Farmer, France Gall, Michel Berger, and Etienne Daho, who I believe was considered “New Wave” at the time.
Adriano: Brahms‘ lullaby, played by a music box placed on my cradle. A few years later, my father playing a „The Rite of Spring“ record on Sunday morning to wake me up. That was a ritual too: classical music on Sunday mornings.

Which person, artist or incident inspired you when you first started making music?
Cecilia: Ever since I was a child I have always loved singing. I made my own songs and sang them without music. Then for years I studied singing and then I only sang other people’s music. When we formed Echoberyl I was looking for myself as a singer and songwriter, and I was thinking intensely about where I wanted to direct my artistic career.
Adriano: My uncle was a drummer in a rock band. He gave me my first guitar, he fed me with massive doses of Elvis, Premiata Forneria Marconi, Deep Purple, the early Pink Floyd. Then, I discovered the music of the 80s and 90s. New Order, Depeche Mode, Siouxsie. But also Aphex Twin and the others from 90s „Ambient Techno“ scene.

What impact do your surroundings have on your art? Which sort of mood produces the best song?
Cecilia: I think I am mostly inspired by my subconscious. I believe I have a very contemplative personality. I think a lot, sometimes too much :) So rather than my surroundings, I am influenced by my emotional reactions to my surroundings. As an actress, I have been working on this for years, and I have brought this work with me to Echoberyl.
Adriano: I’m an ordinary guy. I spend a lot of time alone, I go to the supermarket, I read, I watch movies every day. I don’t believe in inspiration. Making music seriously is a matter of imagination, method and hard work. But it is also true that the best ideas come to me while I sleep. I wake up at 3 or 5 in the morning, turn on the computer and start recording before the idea fades away.

How does the birth of a new composition happen for you? How does your compositional process work?
Cecilia: At first, I look for a „fil rouge“ for the whole album, a leitmotif that binds the songs together. Then, based on this, I develop embryos of ideas suitable for Adriano’s rough tracks. Some of my stories are transformed into lyrics by Arianna Todero. Others are written by me, such as „Salomé“, „Medea“, „La Dame en Rouge“ and others. Finally, Adriano and I work together on the final versions, while recording the vocals in our studio.
Adriano: I am a hen. I can produce one egg a day. So, for each album, I record a load of sketches and rough tracks. Generally between 60 and 90. Then we select the best ideas and start the lyrics writing phase.

What can you tell us about your recent album ‚Mother : Remixes’? What do you find particularly fascinating about working with other artists and projects?
Adriano: After the success of Salomé and Mother Solitude, many have written to us to remix our songs but we are rather shy, perhaps fearful, so we can’t work with people we don’t know well. Mark Cage and Steve Object are our dear friends. Working with them was as natural as working between me and Cecilia. This year we also remixed Camlann, a band from Jakarta, and right now we are producing another friend of ours, Gunther Vanseveren, who is a great artist with a great voice and personality.

How would you describe the world you are trying to create during your performances?
It is hard to answer this question. First of all, we were very unlucky with gigs. We had a first concert in Paris at the end of September 2019 and then, basically, the pandemic broke out. We had various concerts scheduled in Europe but they were all canceled due to Covid. Also last March, we had a big concert in Germany with Minuit Machine, Fragrance and others, canceled for Covid. A disaster. We haven’t had the chance to fully develop our idea of live performance yet. We only started playing live again last April. We will see how it goes over the next few months.

What’s next for you? What are you most looking forward to?
Cecilia: We started writing the songs for our next album. We will probably release a first single (plus remixes) this summer. We are very happy with the ideas that are coming out.
This year we will also release Fluid Ghost’s first full album, Adriano’s „dance“ project, on our own label, Mother Solitude Records.
What are we looking forward to? Since the release of the two singles, „Salomé (Suffer Me)” and „Mother Solitude (club mix)“, last summer, and then with the release of the album Mother Solitude and other dark tales at the end of October, we have lived very exciting months. We have increased the number of fans, streams and sales by more than a thousand percent. For us this is vital, because Echoberyl is our job. I integrate it with my work as a theatrical actress, but Adriano does just that: music.
So we are very happy, but almost every day some fans write to us „I discovered you today and I love your music!“. I’ll tell you what, getting known is hard work :) So, this year we’d like to keep telling interesting “stories in music” and reach an even bigger audience and get to the level of the best known bands in the scene.