Who is behind Infinite & Divine?
Infinite & Divine is the creation of Swedish musician/songwriter/producer Jan Åkesson and singer/topliner Tezzi (Terese Persson). Jan has previously written and released several albums with StoneLake as well as writing music for other artists. Tezzi was a part of the concept album Fantasmagoria by Epysode 2013 (featuring Tom Englund of Everygrey and Mike Lepond of Symphony X among others).

If you had to put your music into a drawer and print a label on it, what would it say?
We have a sound of course, although the songs on our album vary in style. We kind of like the fact that it’s not that obvious to put a label on it. In the big picture though it will probably land as a mix between melodic hard rock and melodic metal.

Forget about genres for a second – Infinite & Divine’s music sounds like …?
Like someone took all the best bits and pieces of things they like, influences and experiences and threw it all in a bowl and just mixed it up into one big, delicious cookie dough.

Which sort of mood produces the best songs?
We don’t think there has to be a specific mood as long as the emotion shines through in the music, making it feel alive no matter what mood initiated the creative process. A lot of people say you write the best songs when you’re heartbroken or just sad and we’re not saying that’s not true, but it’s a bit tough having to be clinically depressed over and over to write an album. You can learn to work from different mood sets and probably find a lot of dimension in your writing that way.

Which instrument will surely NEVER be heard on an album by Infinite & Divine?
That’s a fun question. We do like to keep an open mind about things and music, but you will most likely not hear a Kazoo-solo in our songs any time soon. Probably not a bagpipe either!

Which record would you want to listen to when you leave the bathroom in the morning, while the beautiful girl / handsome guy from last night is still in your bed?
Guess that depends on if you wake up happy about it or with hangover anxiety. Haha. But assuming you’re in a good place, basically anything you like. Why not “Hysteria” of Def Leppard or Aerosmith’s “Permanent Vacation” or well who knows, there’s too many! 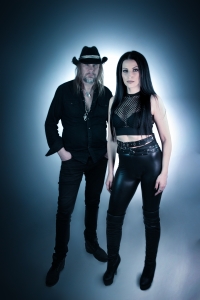 The Fairy-Godmother pops up in front of you and grants you a wish. What do you wish for?
For the whole Covid-situation to be over so that we can get out there and hit the stage!

No alcohol is no solution either. What booze combination will definitely dissolve all your troubles and issues?
Tezzi: I don’t drink much booze. I’m more of a beer kind of girl. And red wine. Although I really love rum, so I’ll go with that then.
Jan: Same here, I usually go for beer or wine.

What shows you that someone is a true friend?
Having an understanding and respect for each other, being able to agree to disagree without it causing trouble. The knowledge of someone being there even though you haven’t talked to the person for a while. And honesty, always honesty!

Who was the hero of your childhood?
That is such a hard question. It depends on what you consider a hero to be, since it can be so many different things.
Tezzi: I have no idea, but I’ll go for my childhood soccer-hero Michael Owen while he was in Liverpool. I had a poster and a home-made sign on the door to my room saying “Here lives a Michael Owen fan”.
Jan: I don’t really know what to say either but Sweet is a band that I really looked up to as a child and liked very much, so that will be my answer.

What is the most embarrassing/surprising record in your CD-shelf?
Jan: There’s nothing I’m ashamed of in my CD-collection but something surprising might be Michael Bolton.
Tezzi: Spice Girls! I am in no way ashamed, I still love it! Might be surprising though.

What’s next? Tour? Studio? Vacation? Something completely different?
We have already started writing songs for another album and we are within the upcoming days entering the rehearsal room for the first time to start rehearsing the album so that we eventually, when opportunity opens, are ready to hit the stage!