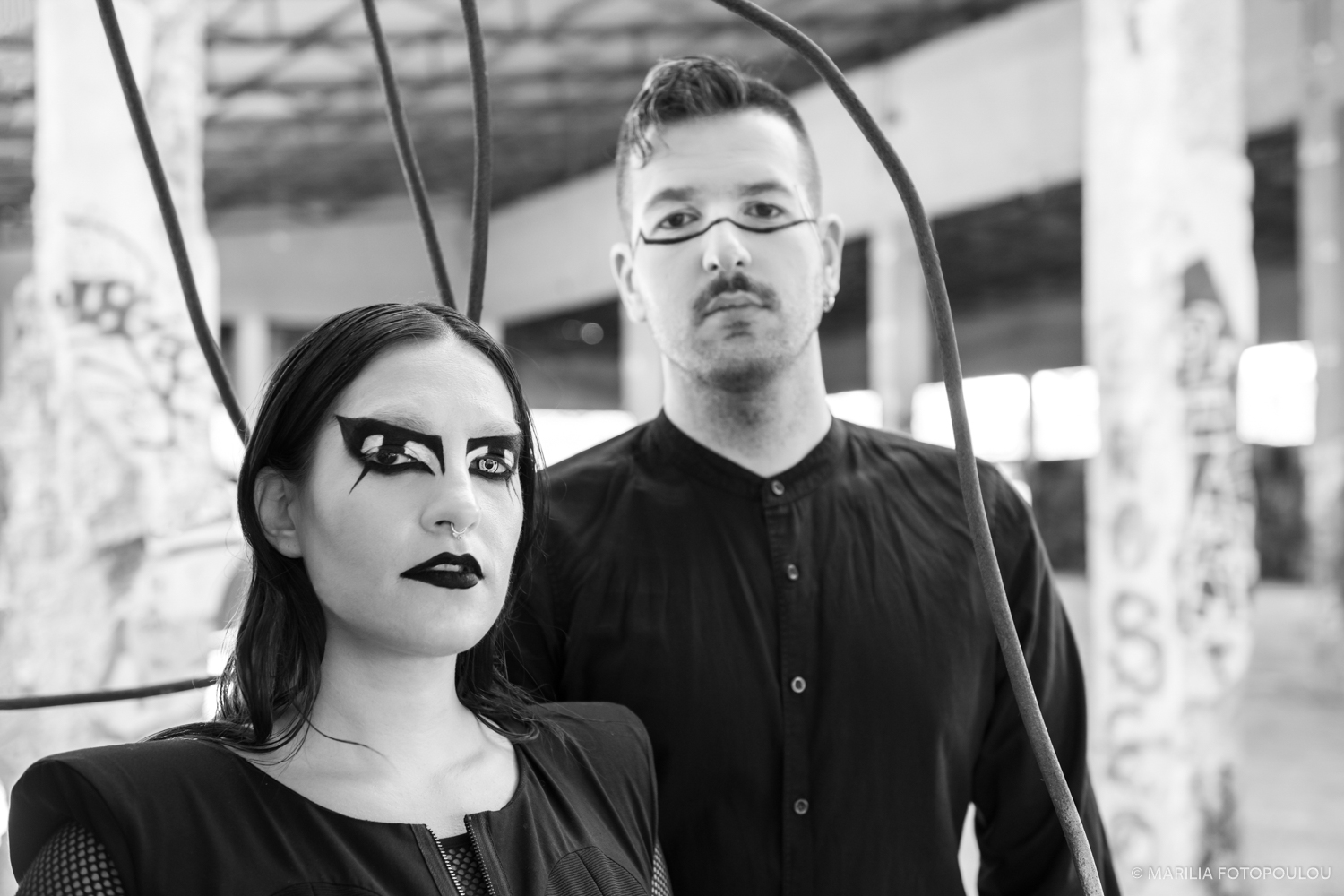 Who is behind Kalte Nacht, and how did the project come into being?
Nikos: Kalte Nacht first happened as a project of mine, in an Athenian room, back in 2017, just for personal pleasure. Very soon some compositions were created. After a little while, I met with Myrto. We clicked as humans, both musically and aesthetically, so we carried on as a duo.
Myrto: Nikos is definitely behind Kalte Nacht! I joined in around late 2018, when a mutual friend of ours, Kostas, introduced us to each other and the rest is history. We had never met before, let alone collaborated, so the fact that we were both open to explore where this Kalte Nacht journey would take us, brought us where we are today. We met and continue to get to know each other through this project, growing and blossoming together.

Can you tell us a few things about the connection between you two and your journey into the music?
Nikos: I feel that the most beautiful fact about the in-between us is that, although we have so many things that unite us, we are at the same time very different people as well. Especially in the beginning this was hard, but also very fascinating. Each one of us bears our unique elements and through this unity the final result is being formed.

Myrto: For me, this connection with Nikos is very unique and will always be, as everything seems to flow so smoothly and effortlessly. Our similar ethics, above all aesthetics and love for music and expression through it, leads us to challenge each other continuously, out of our comfort zone and closer to our core. 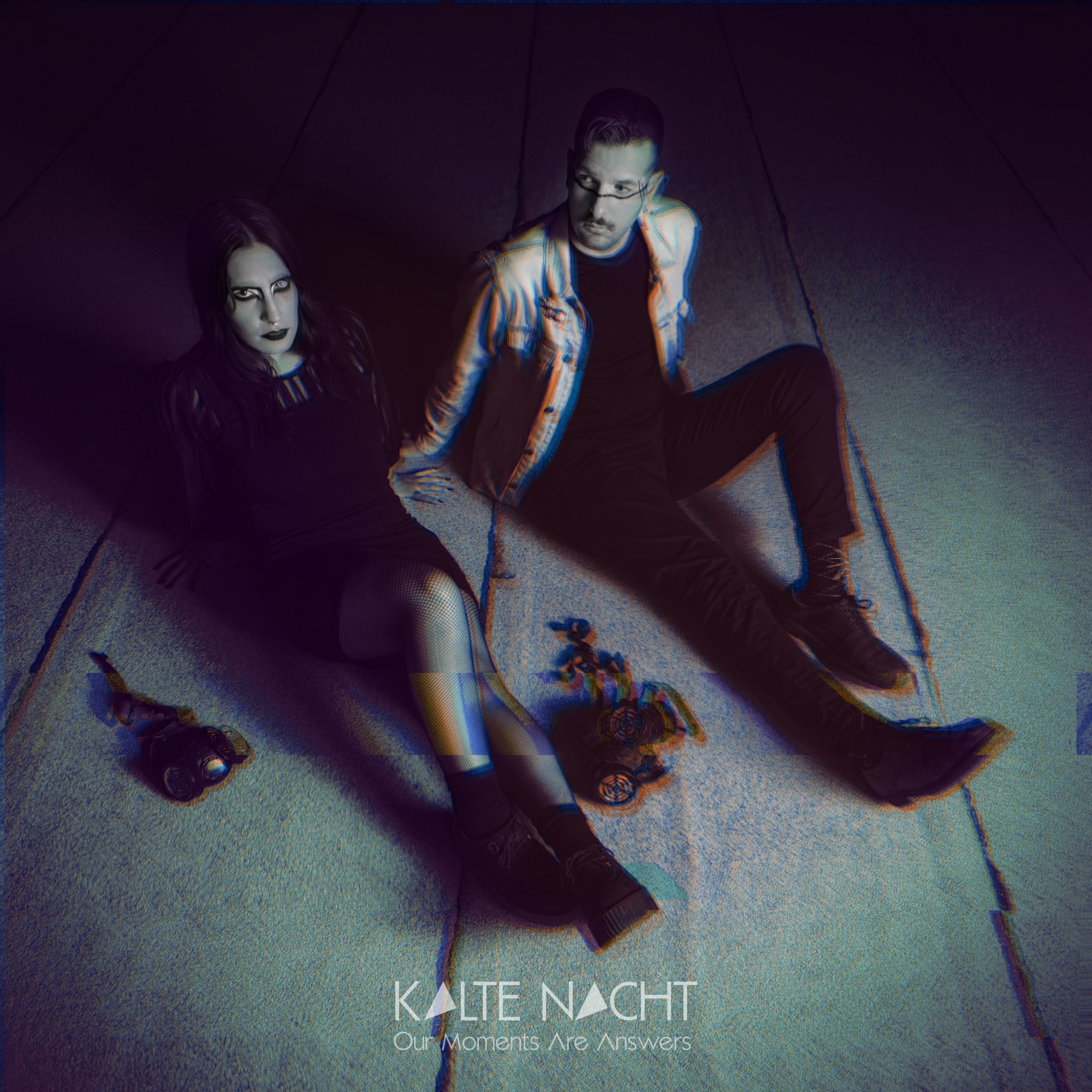 I believe this mutual goal of authenticity is what clicked since the beginning. As a team, we have found our way to work as one, even though we have our differences and each of us their special perspective about life and music in general. The most important thing that creates this magic when we write something, is that we both truly listen to each other and coexist in our terms, without overshadowing, competing or antagonising. Through our music, we have found a common ground and of course our unique voices.

If you had to describe your music in terms of not music … what would you say?
Nikos: I think I would describe it as the expression, the creation and the communication.
Myrto: A continuous journey towards the light and closer to the truth. Diving deeper together into our inner self with the utmost honesty and exposure.

What are your first musical memories?
Nikos: My first memories are at home. Music always had a significant role.
Myrto: Oh! My mom singing Leonard Cohen from her vinyls to me, when I was perhaps three or four years old.

Which person, artist or incident inspired you when you first started making music?
Nikos: It’s a journey that begins way back. I have been influenced by many people, stories and even more artists and music genres. Music is in my life ever since I remember my self, so I believe it is about a combination of a million things that have shaped my own music, too.
Myrto: I can’t really say that it was just one person or incident. For me, music has always been my dear sanctuary, ever since I can remember myself. It was an almost natural turn of events when I started writing lyrics as a teenager and then improvising music on my guitar, which by the way was the easiest and fastest way to accompany myself while singing them out loud. An inevitable way of expressing and trying to understand better all the anger, the injustice I always felt about this out of balance world inside, but also outside of me. My first official physical music encounters though when I bought my very first CDs was System of a Down, BB King, Mogwai and Ella Fitzgerald. Indicators of how music never had any kind of genre labels in my head. Just their common denominator, passion, authenticity and unique forms of sound.

Last your debut album „Kalte Nacht“ came out. How did your compositional process work?
Nikos: I already had some seemingly formed ideas, mainly for the instrumental parts of the songs. The vocal compositions were written mostly by Myrto, but overall it was a 100 % team process, where in all the tracks we both contributed enormously, without limitations or strict boundaries. Here, we would also like to thank our producer, Nikos Triantafyllou, for his immense contribution, who acted essentially as a 3rd member of our band and contributed substantially to our final sound. And of course, Geheimnis Records, and especially Panos Dread, who truly believed in our music and vision. 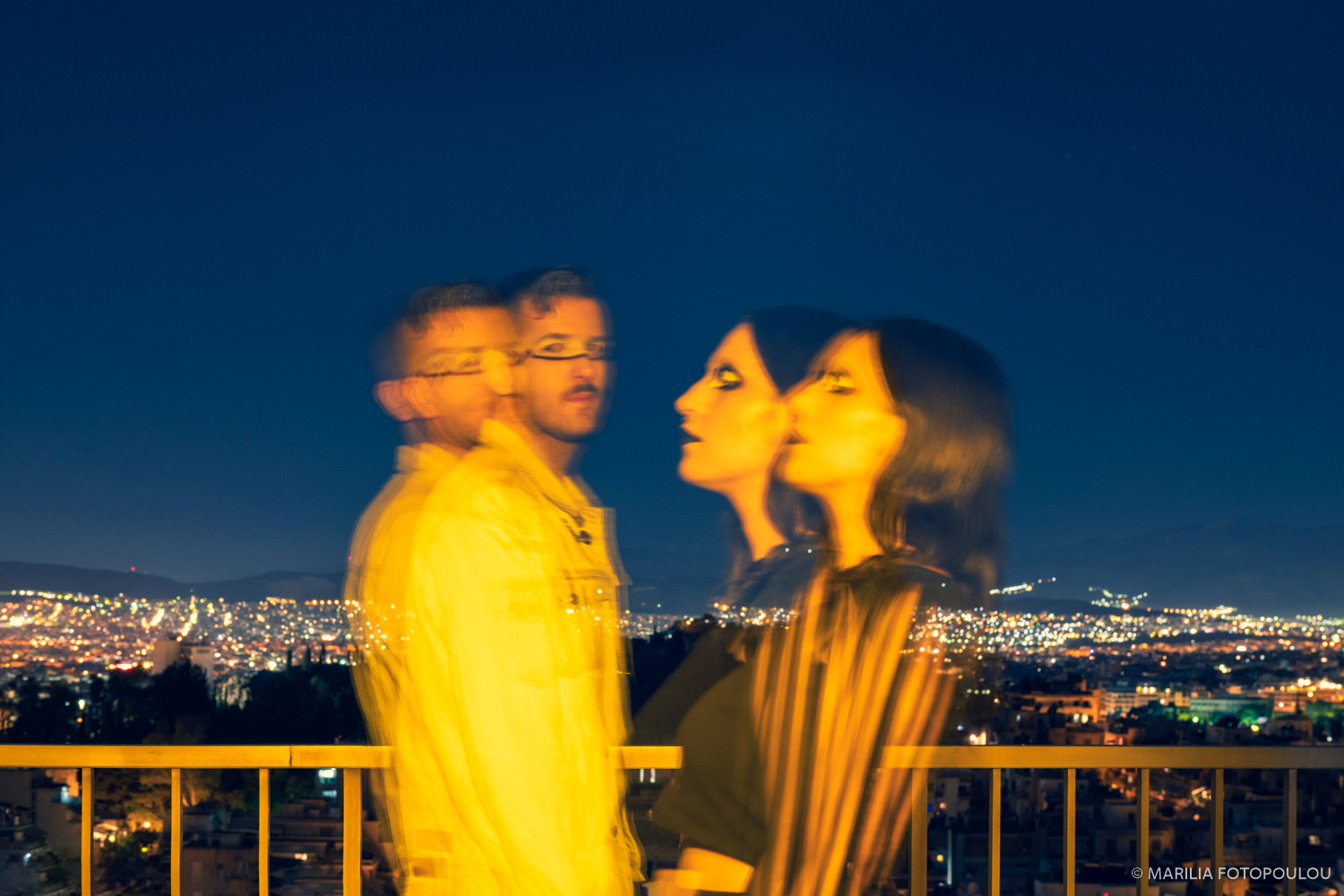 Myrto: We don’t really have a default process when we write music, as we go along with our ideas when they come, I would say. Sometimes Nikos will generate a song that will act as a base to write lyrics on and then we’ll develop it further together, other times I will write some lyrics that will inspire a music composition and then we both collaborate on the final result depending on our feelings towards each song. It’s nice that for this album I was still in Athens for the most part, so we were able to have more time to experiment together on different sounds, vocal styles and atmospheres for the songs at the Sonic Playground studio (a true playground from musicians!). Nikos Triantafyllou, who owns it, actually holds a vital part in Kalte Nacht, educing our best selves when creating a structure for our material and always being open to where the sound is taking us through its limitless possibilities. We could not have done it without him.

Where does your inspiration for music come from? Which sort of mood produces the best song?
Nikos: I think our influences have to do with our everyday experiences and people as a society and interpersonal relationships, especially during so deeply problematic and dystopic eras as the present one today. All this mix up creates crazy emotions that are being expressed autonomously through music. It doesn’t have to do with a particular mood. When I write I feel the need to distance myself from everything, so that I have the stillness and focus of decoding what I feel.
Myrto: Inspiration is everything and nothing at the same time. It’s all kinds of stimuli from our ever changing environments, people around us, circumstances, emotions either known or unknown. I would say it’s the freedom to create an amalgam of all of these together in between the blank space of just being present in the moment of creation. As far as the mood is concerned, I used to believe that when I am in a bad mood, angry, lost, alone, I was more creative and true to my art. Now, I will say with certainty that there is no particular mood. It’s just the need to express all these inner dialogues, questions, doubts and precious findings that we carry daily within us. Share them with more and more open ears and hearts, to start a creative dialogue and reach this catharsis all as one.

Which instrument will surely NEVER be heard on a Kalte Nacht track?
Nikos: I don’t want to say big words and in general I am trying to be open-minded, but an instrument I would never imagine in Kalte Nacht would be physical drums.
Myrto: For now, I will say I don’t even know if there is one! Being on this path of always pushing our limits further and further towards the unknown, maybe there isn’t one! All are welcome to this Kalte Nacht journey, possibly everything has its place.

No alcohol is no solution either. What booze combination will definitely dissolve all your troubles and issues?
Nikos: Lots of different great combinations come to mind, but I think that what I miss the most right now is dancing and nights out along with whiskey and friends!
Myrto: Been there, done that, I must say that none so far has managed to dissolve anything. Perhaps even made it more intense, or even brought it right in front of my face the next day. All jokes aside though, being in London some two years now, I miss Greek tsipouro as hell!

What is the most surprising record on your CD/Vinyl-shelf?
Nikos: Surprising? I don’t know, this is too subjective. I am definitely happy though that I have some very rare vinyls (specifically first editions) in my collection, from some exceptional bands of the 80’s Greek scene, not so well known to the general public, especially outside of Greece. However, my record library is in general incredibly small.
Myrto: It’s not one, but a box with a whole collection of records that I inherited from my Cretan aunt some years back. It includes 30-40 vinyls with Christmas music from all around the world! A fun addition to my multiculti physical collection of CDs and vinyls.

What are your plans for the near future? What do you wish for?
Nikos: Our basic goal is one and only: To continue expressing and existing through music. From there on, just a few days ago we released a new digital single titled “Our Moments Are Answers” along with a video clip on Youtube, as well as on our Bandcamp page. We also are in the process of writing the songs for our new album, although it is still too early. On a broader level, I am personally very disappointed with the current global circumstances and specifically in my country, where apart from the lockdown and the general degradation and exhaustion, we are daily experiencing raw police violence and repression. 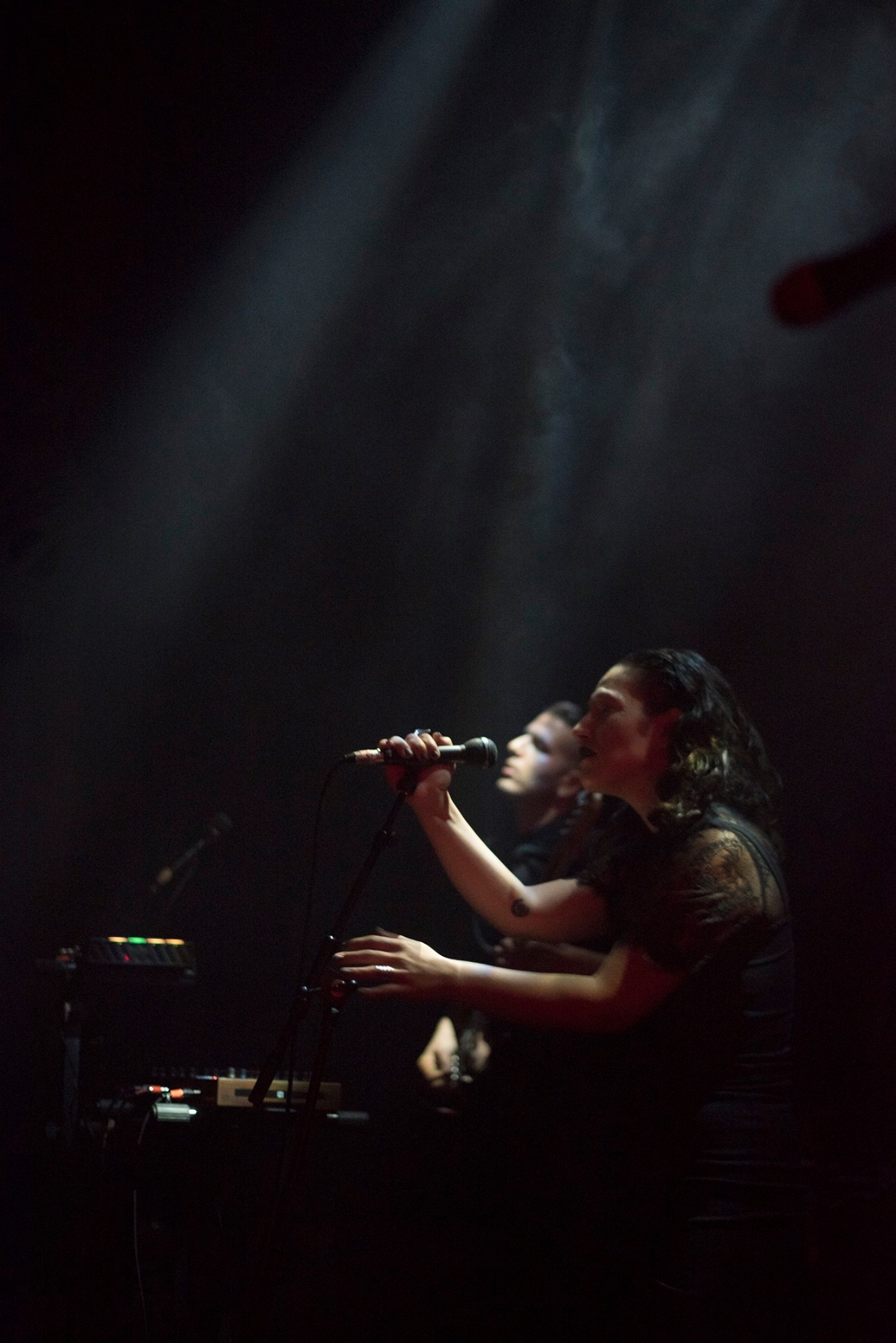 However, I remain optimistic and I cannot wait for all of us to meet again soon, to hug, drink, dance, sweat! And of course, as a band to return to live performances, as unfortunately, we never got the chance to present our debut album live!

Myrto: Considering the distance between us since I moved to London, my hope is that we can continue finding ways to write new material even though apart. Although it looks promising and I feel really proud that we made it happen with the latest release of our single “Our Moments AreAnswers” and the visual along with it. Our plan is to walk this path together, by keeping our spirits high, although sometimes the world feels like it’s crumbling down and we can’t do something about it. To reach out to as many willing souls as possible, to connect through our music and to remain human, embracing all our mistakes, contradictions and perfect imperfections. I can sense in the air that changes are coming faster than light, as these times we’ve all been truly shaken to our core, continuously being tested to our limits. I just hope with all my being that we will choose wisely to stay united and not divided and to acknowledge that art, music and culture are some of the most significant parts of our existence.