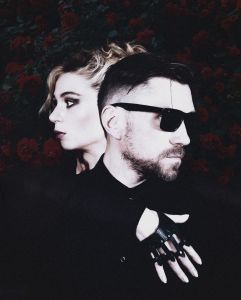 Who is behind NNHMN?
Lee: Two non-human persons, two hungry ghosts with the longing for immortality – long story short: two local vampires.
Michal: Me and her (laughing).

If you had to put your music into a drawer and print a label on it, what would it say?
Danceable darkwave with female vocals.

Forget about genres for a second – NNHMN’s music sounds like …?
… like a contemporary authorial wavy version of dark electronic music based on arpeggios and rhythms, ambiguous and mysterious atmospheres.

Which sort of mood produces the best songs?
Lee: The fragments of silence in between moments during the everyday busy day produce the best fragments of lyrics. Those moments are like hanging gardens, micro-meditations, and sudden flashes of brilliance – from this moment on I start to weave a lyric. Like a spider.
Michal: Anytime we can focus on music, it is a great and passionate time. I always think that it’d be best to start to produce fresh in the morning but the truth is we often work late at night.

Which person, artist or incident inspired you when you first started making music?
Lee: I’ve always been taken with vocalists who sing in a glossolalia manner because I have been singing in tongues for a very long time now. Throughout this abstraction, a new pocket of existence opens up, a form of ritual practice as a psycho-dramatic catharsis – the idea that forces could be manipulated through „purely emotional“ rather than intellectual acts.
Michal: I started playing music as a teenager in a punk band, so for that moment my heroes were The Exploited, D.R.I, Slayer. Of course, over time my musical perspective changed and other inspiring artists came into my life, but the old love never dies. 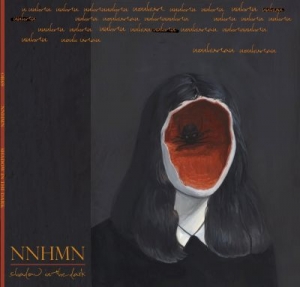 What is currently on your playlist? Any recommendations – … or other stuff?
Michal: Lately on my list: Deutsch Nepal, excellent music oscillating between industrial and dark ambient. And this one is more like a regular position on the playlist: Lustmord – the master of dark ambient.
Lee: With three albums produced in 2019, I became the hunter of silence … I haven’t heard much of the new music. I can’t help but love Death in June. Obscure minimal synth gems, Mitra Mitra, Nico, spoken Kim Gordon – I thought about her while recording our Black Sun.
Very often I can’t listen to music, I feel overwhelmed with the amazingness of other people’s works – it doesn’t let me concentrate on my path. But I’d like to recommend a few movies – I am crazy about Mandy, Hunger by Steve McQueen and Austrian Angst – the scariest thing I saw in my whole life.

Some fun questions: Which record would you want to listen to when you leave the bathroom in the morning, while the beautiful girl from last night is still in your bed?
Lee: Well I would take a gun and drag her out of bed for a fast ride around Berlin, I would play David Bowie – „I’m deranged’’ very loud, and … then we would commit together some robbery or something like that.

The Fairy-Godmother pops up in front of you and grants you a wish. What do you wish for?
Lee: I always wanted to take a bath in a swimming pool full of Nutella, no seriously I always wanted to fly.
Michal: Maybe something practical, like a synth, a poly analog one which can play directly from the mind and doesn’t need cords at all.

What’s next? Tour? Studio? Vacation? Something completely different?
Actually, we are about to start our European tour. We will soon be in Brussels, Barcelona, Madrid, Salerno, Paris to name but a few. Also, we’ll play a short tour in Poland. And then festivals, in Athens in summer, later on in Barcelona. We’d like to get more gigs in Germany in the autumn. But for now we can say we’re supposed to come to Bavaria in November.