If you had to put your music into a drawer and print a label on it, what would it say?
Folk Metal, plain and simple, we do have a lot of Baltic influences on our lyrics, but after all we are Folk Metal, as metal is a big core in all of our songs and albums. I think that the heavy guitars and “big” sounding drum kit, with the bass playing the metal riffs is a must have in most of our songs. We are all metal heads, and in our music it reflects pretty well I hope …

Forget about genres for a second – Romuvos music sounds like …?
We sound like little farts of beautiful angels – now seriously, most of our inspiration is coming from bands like Bathory, Falkenbach, Summoning, Heidevolk, so I guess you can catch those tones in our music. We aim for the epic kind of Folk Metal music, and we like to be on the mid to slow tempo range of songs. I think that Folk Metal these days is “happy”, and we aim to be dead serious when it comes to writing songs, but as you can already tell, we are pretty jolly fellows when it comes to our daily life. But once we write the songs, we aim for a more serious angle and put some “balls” in it. The name of the band and most of the lyrics suggest we are 100% Baltic folk, though we try to put into the music an open-minded approach, adding our influence from other big bands that we grew up with, as Iron Maiden and many other metal bands that we personally like.

Which sort of mood produces the best songs?
Well, that’s a tough question, when I have a muse, I let it take me, all I do is try to dwell into the world of imagination and travel far into the past. I think mood-wise, it would be a pretty regular mood, though it is more of a muse approach for me, that can take me to places where I can almost smell the air and see the visions in my head. My muse usally comes from the nature surrounding me or a movie I just saw, like Lord Of The Rings, Never Ending Story, The Goonies. Sometimes a good record can light my fire into writing new songs.

Which instrument will surely NEVER be heard on a Romuvos-album?
Oh my … I’m against boycotting instruments – I love them all, they are all wonderful, until somebody who doesn’t know how to use them plays on them. On our last album we even recorded spatial bells and rings for percussion. So, I’m sorry but I can’t answer that one.

Which record would you want to listen to when you leave the bathroom in the morning, while the beautiful girl/handsome boy from last night is still in your bed?
I am married with children for far too long now, maybe the opening song of the series, I think it’s Frank Sinatra’s song „Love And Marriage“ … Well, if I try really hard to remember those days when it happened, I would say that Summoning or Mortiis was well played back in those days. 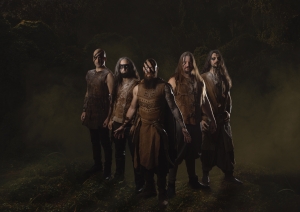 The Fairy-Godmother pops up in front of you and grants you a wish. What do you wish for?
Health for my kids, wife and me, 100%, once I have everything that I need. I just want everybody whom I love to be healthy and happy. When you grow old (38, I know not that old but …), the things in life that you used to take for granted are getting more and more precious, I think it’s because once you are a parent and you have this big responsibility for your family, it takes its toll, and I say thanks for just waking up in the morning and see my loved ones with me, happy and safe.

No alcohol is no solution either. What booze combination will definitely dissolve all your troubles and issues?
Ahhhh, I love alcohol, so I can’t just pick one. I love them all as if they were all my children. I went to some awesome cocktail bar in Rome, Italy. I looked at this menu and wow, I just couldn’t pick one, they all seemed to be pretty high end cocktails (as if a kid enters to a huge amusement park), so the bartender asked me what kind of alcohol I like, I said every kind, and when the clock hit 2 a.m. I was through tasting the entire menu, 15 drinks in total and a 200 Euro bill. Considering the mood right now and the fact it’s an interview for a metal mag, I would go for Jack Daniels plain and simple, with ice and zero coke, hell I can take it raw from the bottle as well.

What shows you that someone is a true friend?
A good friend is being measured once in need, when things go wrong, when the ship is lost in the vast ocean, when you’re in a need for someone to hold you, back you up, or just guide you back to your route, then, and only then, true friends are being measured.

Who was the hero of your childhood?
Arnold Schwarzenegger! The one and only! I used to collect pictures of him, cut out interviews from magazines and placed all of that inside notebooks that I made especially for him, I sued to train and think as if I was him … 8 years old, ok?

What is the most embarrassing/surprising record in your CD-shelf?
I don’t think it’s embarrassing, but yeah, maybe surprising, Miles Davis‘ Walkin'[/i], though I have few jazz records and some non metal records, most of my records and my beloved music is pure metal since day one, but as a musician who loves music I have travelled the world of music from one side to the other.

What’s next? Tour? Studio? Vacation? Something completely different?
Touring is not our thing, we usually play only in a few festivals a year, not more than that at the moment, next thing is working on the fourth album! Already boiling some pre-matured songs and starting to throw spices into the pot.