Who is behind Strawberry Pills, and how did the project come into being?
Antonis: Strawberry Pills is made up by me and Valisia, but we have worked with the same team from day one: Our music collaborator Aristomenis Thodoropoulos (known for his FEF/ΦΕΥ project), our producer Panos Tsekouras and our videographer, Aris Athanatos. Me and Valisia used to be members of a band called Phoenix Catscratch and when that ended, we began collaborating on various projects. Last year we decided to form this group and we just kept the name that we used some years ago for one of those projects.

How did your band name come about, and what does it mean to you?
Valisia: People’s mindset is defined by dualism, good and evil, light and darkness, black and white. Strawberry Pills stands for this eternal contradiction, so on the one hand we have something sweet and harmless but on the other hand we have something addictive or in need of healing.

If you had to describe your music in terms of not music … what would you say?
Valisia: Enigmatic, addictive, ominous, mischievous, dangerous.
Antonis: Part time songs, part time horror films. 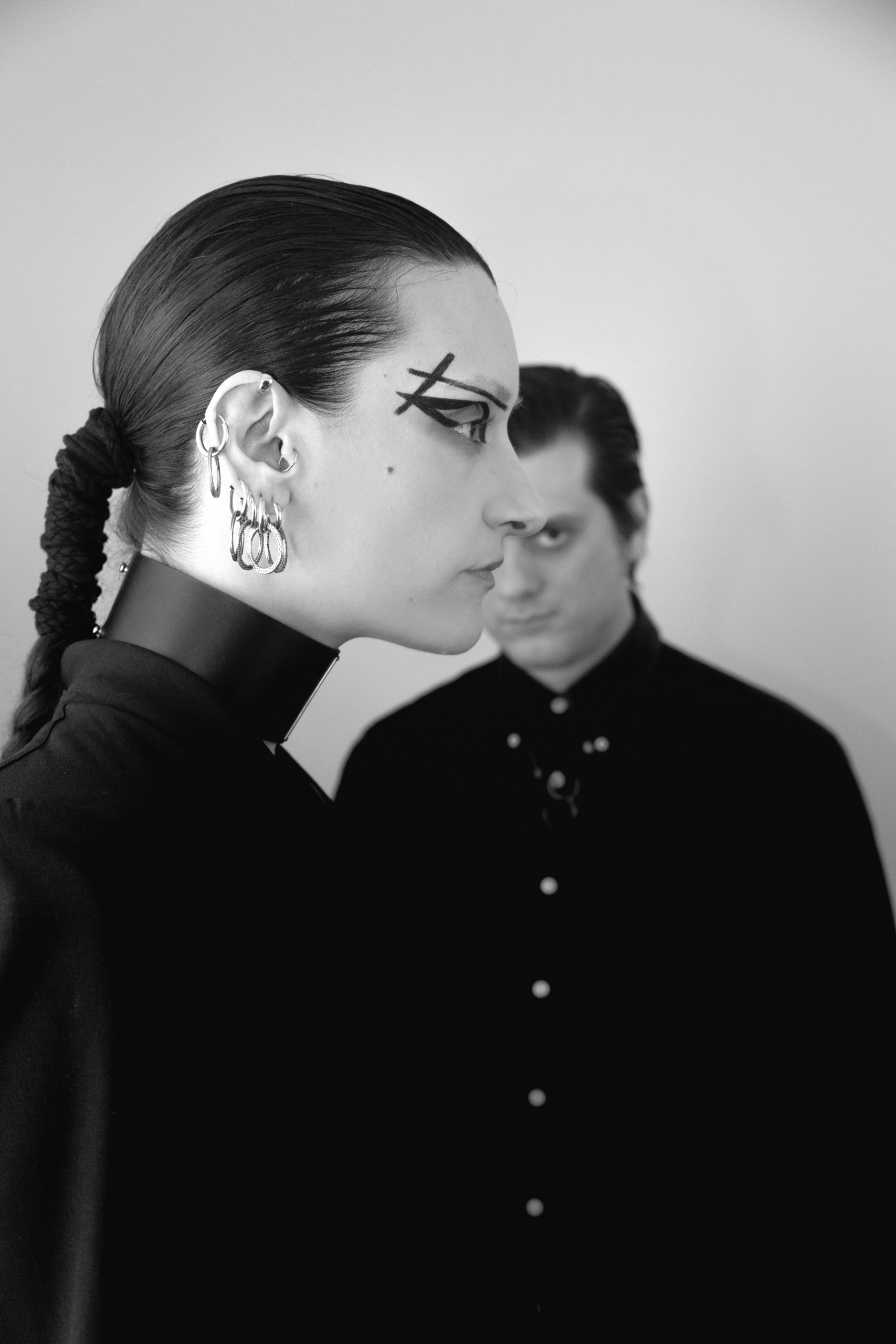 What are your first musical memories?
Antonis: Me being around four or five years old, singing along to „Living On My Own“ by Freddie Mercury. My mother recorded me with an old tape recorder, I still have that tape somewhere.

Valisia: Me as a little girl trying to impersonate „The Misfits“ from the animated series „Jem and the Holograms“. They were really badass!

Which person, artist or incident inspired you when you first started making music?
Valisia: It was probably the movie „The Hunger“. Plotwise it is a bad vampire movie. However, its striking protagonists (Catherine Deneuve, David Bowie and Susan Sarandon), costumes, set design, aesthetics in general combined with Bauhaus‚ iconic performance of „Bela Lugosi’s dead“ was enough to contaminate me.
Antonis: The band Loveburger by the 90’s teen movie „Can’t hardly wait“. They never played a song because they split up onstage while getting ready for their first show.

Your debut album „Murder to a beat“ will be out in a few days. Can you tell us some things about the process of the creation of it? How did your compositional process work?
Antonis: We recorded it in six months‘ time. Nothing was forced in the studio. We usually have an idea for a song, maybe a bassline, some lyrics and the main vocal melody, and we meet up with Aristomenis. The three of us work on ideas and make a demo. Then we head to the studio and finish it with our producer, Panos. Me and Valisia, we both write lyrics.

Where does your inspiration for music come from? Which sort of mood produces the best song?
Valisia: It varies. It may come from a photograph I see, a painting, a movie or from a book I read. For me, it’s not the current political and cultural topics that motivate me to write music and lyrics. I’ve got a more timeless perspective on things, mainly through the several forms of art and secondly through history.
Antonis: I can’t help being inspired by politics or everyday struggle, but I never base a whole song on matters like that. I usually put a couple of quotes in the lyrics and stick to the song’s story. What I discovered while listening to „Murder to a beat“ is that Ι really like making up characters and putting them into songs. Most of them based on people that I have or had in my life.

Which instrument will surely NEVER be heard on a Strawberry-Pills-track?
Valisia: I cannot tell you which instrument will never be heard on a Strawberry Pills track but I can definitely tell you which one I really want to indulge ourselves with. And that’s the saxophone. I would loooooove a killing, deranged sax solo such as the one in Romeo Void „Never say never“ or in Viagra Boys‘ „Slow learner“.
Antonis: I couldn’t agree more with Valisia. There’s always space for a sax solo. I don’t think that I would exclude any instrument from a recording. Never say never they say.

No alcohol is no solution either. What booze combination will definitely dissolve all your troubles and issues?
Antonis: I haven’t had any alcohol for almost two months now, but a glass of Sailor Jerry with an orange peel in it can take me away from all my trouble.
Valisia: It’s not the booze combination that would help me if not to dissolve, then definitely to soothe my troubles and issues but the combination of booze with other pleasures that I enjoy. So, for me the solution is the taste of fine rum at night along with the smell of a delicate perfume combined with tobacco, the laughter of my friends and of course the sound of music.

What is the most surprising record on your CD/Vinyl-shelf?
Valisia: There’s nothing that surprising. However, I have lots of 60s pop, beat, garage, psychedelic records from artists such as The Yardbirds, The Small Faces, Herman’s Hermits, Johnny Hallyday and many many more, since my parents were into the mod culture. My personal favourite is „Baluba Shake“, a single from an Italian band called Brunetta E I Suoi Balubas.
Antonis: An amazing compilation of outsider music artists called „Songs in the key of Z“. It was put together by a guy named Irwin Chusid who tracked down all those weird visionaries. He also wrote a book with the same title which is also great.

What are your plans for the near future and what do you wish for?
Valisia: Our plans are to start working on our second album and what we wish for is, of course, to globally overcome the corona virus menace and storm onto the stage again!