Who is behind Grabyourface?
Just me, Marie Lando, a French girl who has been influenced by all kind of dark sounds, from Black Metal to early Industrial, Synthpop, Techno and Vaporwave, to name only a few.

If you had to put your music into a drawer and print a label on it, what would it say?
Erm … Sad Coldwave Industrial Hiphop? Or maybe just Sadwave, I quite like the term, and it’s labelling a lot of my new influences despite genre (Lil Peep etc.).

Forget about genres for a second – Grabyourface’s music sounds like …?
Sitting by your apartment window on the 78th floor at 3am, smoking a cigarette, feeling sad about how things turned out to be. It’s raining outside.

Which sort of mood pro 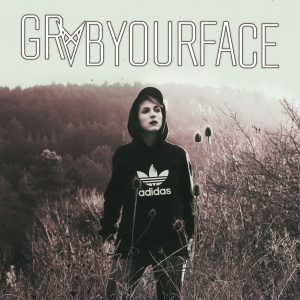 duces the best songs?
For me I’d say feeling detached enough for my situation to actually look at it like a witness. Not when I’m too overly sad because then I can’t take a step back.
That’s probably why I write most of my songs while travelling, cause being in transit gives you this feeling of not quite being anywhere, like a pause in time when you can look at things in more details without affecting them.

Which instrument will surely NEVER be heard on a Grabyourface-album?
That is not something I would really say. I love discovering new instruments and sounds, and I believe any instrument can fit any song if you give it the right edge.
A saxophone can become menacing, an accordeon can create a creepy atmosphere. There is no limit to that kind of thing if you’re ready to experiment.
… But maybe the kazoo.

Which record would you want to listen to when you leave the bathroom in the morning, while the beautiful girl from last night is still in your bed?
Damn, what is this woman doing here, we only played Monopoly as far as I remember.
I’d say I’ll like something smooth and bright, especially if it’s sunny outside and I’m in a good mood. So maybe an album by Duett or Home.

The Fairy-Godmother pops up in front of you and grants you a wish. What do you wish for?
I wish for everyone to listen to Grabyourface. That’s a pretty selfish wish. *smiles* Do I have to do a selfish one or a “end world hunger” one?
If I have to be selfless, I’d say that everyone suddenly, magically had the ability to listen to others’ point of view even if they disagree.
And then they should all listen to Grabyourface together.

No alcohol is no solution either. What booze combination will definitely dissolve all your troubles and issues?
I actually don’t drink a lot. *smiles* But I like drinking sangria by the beach in summer, like I’m in a Lana del Rey music video.

What shows you that someone is a true friend?
The usual I guess, when they are there for you in times of trouble. SInce I started making music I can add one more thing to that: people who support you when you are a creative, take the time to listen to your music, share it, buy it, and also don’t become jealous when you’ve got a little bit of success.

What is the most embarrassing/surprising record in your CD-shelf?
Wow, uh, a lot. *smiles* I am so not embarassed by the fact that I’ve listened to some shit and sometimes still enjoy it.
When I was 12 I had a “Blue” phase (it’s an english boysband, for those of you who don’t know), so I probably still have those CDs somewhere. I also probably have a Britney Spears single of that song where she was being sexy in an airplane. Loads!

What’s next? Tour? Studio? Vacation? Something completely different?
So I have just released a new album Keep me closer, which has been quite well received so far, I have done a collaboration with Covenant which will feature on their new release Fieldworks: Exkursion EP, as well as collaborations with Binary Order and Circuit 3 that you should all check out.
Now I’m getting gig-ready, as I would like to play Keep me closer on stage as much as possible in 2019. I literally cannot wait to get back on stage and meet all of you amazing people.

Thank you very much for this super fun interview!