If you had to put your music into a drawer and print a label on it, what would it say?
We would probably call it Medieval Metal.

Forget about genres for a second – Apocalypse Orchestra’s music sounds like …?
Heavy, mid to slow tempo metal with medieval instruments. Lots of harmonies, choirs and organs on top of that.

Which sort of mood produces the best songs?
Not sure what to answer here really. Inspiration may hit regardless of current mood.

Which instrument will surely NEVER be heard on a Apocalypse Orchestra-album?
Saxophone!

Which record would you want to listen to when you leave the bathroom in the morning?
Me personally  would chose Type O Negatives “October Rust”.

The Fairy-Godmother pops up in front of you and grants you a wish. What do you wish for?
That our next album will be as well received as the last one.

No alcohol is no solution either. What booze combination will definitely dissolve all your troubles and issues?
I’m not a big drinker, it mostly makes me fall asleep. But Erik and Jimmy are really into different kinds of obscure craft beer.

What shows you that someone is a true friend?
The ones that stick around when the going gets tough.

Who was the hero of your childhood?
I would say He-man!

What is the most embarrassing/surprising record in your CD-shelf?
I’m not embarrassed for any of the records I have anymore, I’m too old for that! But surprising ones? Maybe some of the more electronic sounding, like the soundtrack to the game Headlander?

What’s next? Tour? Studio? Vacation? Something completely different?
We’re hard at work with the new album. About halfway through writing it now, five songs are kind of done. 40 minutes of music so far, but it’s a long way to go still! 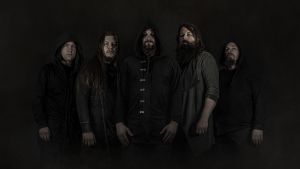