Who is behind the band Suasion? Introduce yourself!
We are four people: Steven (vocals), Nicolas (guitar), Julien (bass) and Virgile (drums) who joined us this year. We are based in the French-speaking region of Belgium called Wallonia.
We define ourselves as an almost independent team, since we create almost everything ourselves: Nicolas mixes our songs from start to finish and Julien produces our music videos. This work method has given us much freedom in the creation process. 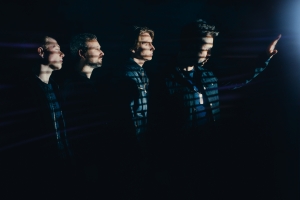 If you had to put your music into a drawer and print a label on it, what would it say?
Steven: Oh, that’s a good one! Our songs can be very different from one another: heavy, soft, sometimes both at the same time. This is something we like to do – bringing together totally different ambiences but connecting them with the songwriting, production and lyrics. But if I had to choose, “Epic Cinematic Metalcore” would make me want to open the drawer.

Which sort of mood produces the best songs?
Nicolas: In my opinion, being in a positive mindset, clear of drugs and alcohol, with plenty of time ahead, is what has worked best for me. The more you enjoy what you are doing, the better the outcome!

Which instrument will surely NEVER be heard on a Suasion-album?
Steven: Never say never! We use a wide variety of instruments. Fun fact: you will hear Theremin on Paralyzed & Infinite. I think some instruments are less likely than others to appear on our tracks though. I would say the Saxophone for example.
Nicolas: None. Let’s put some saxophone in the next song.

Which record would you want to listen to when you leave the bathroom in the morning while last night’s very attractive company is still in your bed, and why?
Steven: Such a specific hypothetical! Usually, I like to start the day with a piece of classical music. Here, since it’s a love affair, I would go for Schubert’s Piano Trio No.2. Beautiful, romantic and it will not wake her up. I always thought the song’s message was “we will meet again”.

The Faire-Godmother pops up in front of you and grants you a wish. What do you wish for?
Steven: A huge tour and festivals. COVID destroyed our plans back in 2020. We lost a big tour and the opportunity to promote our album Stardust. We had to go back in the studio without having had the pleasure of playing shows and meeting fans. It was a hard blow.

No alcohol is no solution either. What booze combination will definitely dissolve 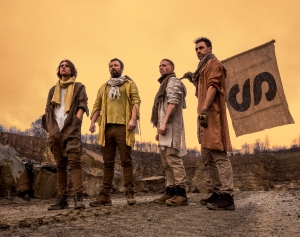 all your troubles and issues?
Steven: As a true Belgian I would go for a selection of beers. We have great stuff over here! My favourite one is Orval. It is made by monks! We even named the planet that we’re exploring in our music videos after that beer. Try it, I guarantee you won’t regret it!
Nicolas: Same! I love beer. One Agasse Blonde and one triple Karmeliet will do the trick.

What shows you that someone is a true friend?
Steven: Simple attentions, you know. It’s not about the material gifts. This is a really important question. I can easily spot who are my best friends because of the way they look at me on stage. When you can see pride in their eyes because I’m having fun doing what I love, it’s something really special.

Who was the hero of your childhood?
Steven: My parents. We had our issues but they gave me a great education. They also got me into music and arts which helped me grow up to be the adult I am today. If I had to pick a fantasy hero, I would say Hercules because of the Disney movie. I always loved that character. He’s despised by others but always fights until the end. It’s a great message!

What is the most embarrassing/surprising record in your CD-shelf?
Steven: As said earlier, I’m a big fan of classical music and opera. This usually surprises people since I’m a metal singer. But yeah, I have a collection of opera CDs and I’m proud of it!

Nicolas: Oh god. When I was a kid, I used to hate metal. Once, I left home in secret to buy the single „Yeah“ by Usher. Then I played it at low volume in my bedroom. But my sister heard it and laughed so hard that I never had the guts to play it again.

What’s next? Tour? Studio? Vacation? Album?
Steven: All of it! At least that is what we’re hoping for. We’re almost done with the studio. After that will come lots of surprises. We really want to go back on the road to meet with our fans. They deserve it for being sooo patient!