Who is behind Troll Bends Fir?
First of all, TBF is 2 people: Jetra and me. We’re from the very beginning of the band. The lineup has been changing during the past years but nowadays it’s probably the best lineup consisting of good musicians and likeminded people, who are able to get on well on tours. This is very important.

If you had to put your music into a drawer and print a label on it, what would it say?
“My precious!“, naturally!

How would you describe the sound of Troll Bends Fir to a deaf person?
Lively, fresh, energizing like… beer!? I would give them a bottle of good cold beer! This same light animation and freshness!

Which sort of panic creates the best songs?
I’m afraid I can’t make up something in any stress situation. When I’m working on a new song and feel it’s going well, I’m experiencing a state of slight trance (perhaps, when they say “Muse made a visit” it means same state). All outside stuff only distracts and disturbs. Actually, many songs are written in buses, planes and long-distance trains, which can run for some days.

Which instrument will surely NEVER be heard on a Troll Bends Fir-album?
Second guitar… a guitar of a competitor! Trolls are afraid of competitions and struggle to protect themselves!

Which record would you want to listen to when you leave bath in the morning, while the beautiful girl from last night is still in your bed?
In the morning… so do I understand right that the night has already been over? Well, then there are two options: first one is a funeral march, another is “We’re the Champions”. Everything depends on whether it was a successful night or not!

Which song would you be proud of, had you written it?
Well, thinking globally, I don’t know. However, locally it’s “Hitting an owl with a stump is same as hitting a stump with an owl” by Infornal Fuck but I’ve already solved this problem – we’ve just made a cover version (on our new album) and now it’s kind of mine *smiles* 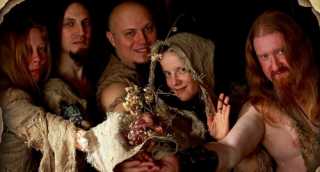 No alcohol is surely NOT the answer – after which combination of booze all your problems will have dissolved?
Long ago I worked as a night security guard at a music club and from time to time made a cocktail that my friends used to name “Mad Troll”. A recipe: vodka + beer + cognac + champagne + long drink (you should take two parts of beer and long drink and 1 of other drinks). After four cocktails there was no problem… though I’m not sure if the others didn’t start having problems… oops.

What shows you a true friend?
If they’re ready to drink with you! Haha, kidding! Speaking seriously, it’s sincerity and I don’t know if it’s applicable to other countries but in Russia some spark should run between two people (of course, without an intimate component, otherwise it’s called different). And alcohol isn’t the least thing *smiles* !

Are we alone out there?
Hmm… I think, not… Peter Tägtgren can’t write such lyrics for no reason and make such videos. He must know something but keeps it in secret!

What’s next? Tour? Studio? Vacation? Something completely different?
At the moment I’m about to bring out one more album – a debut album of my solo humppa project. The release date is at the end of December. Then there’ll be a few gigs, much New Year celebrations and lots of vodka, then again gigs and composing of new songs… Have no idea what they’ll be like!