How did SDH come about?
Sergi: We started in 2016 but we were slow the first two years, just playing a handful of shows in Barcelona. We felt that with our band Wind Atlas everything took a lot of effort, being four people with a lot of gear and all. We wanted to do something easy, that we could do at home and go on tour with just a hardcase and a luggage bag. I wrote the music for „The Scent“ alone at home and I left the computer ready for Andrea to record some vocals. When I got back home the song was finished and we loved it so much we decided to do more songs. Half of the songs of the first LP were written those first weeks and the other half were written in 2017, just some months before recording. 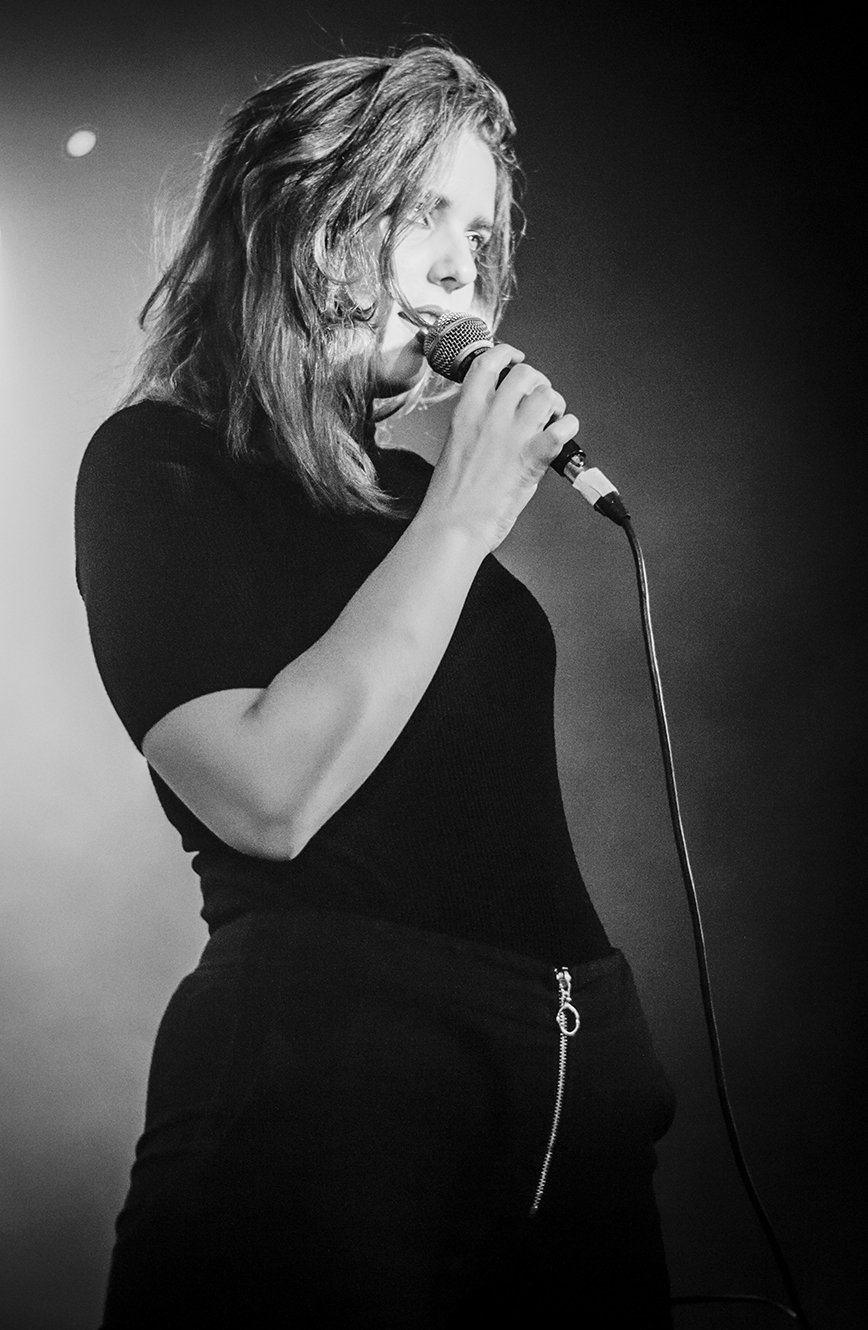 How did your band name come about, and what does it mean to you?
Andrea: SDH explores some fictional figures – and this doesn’t mean that they are false or less real — that interests us as musicians and as people. The name is born from the idea of embodying other types of characters that, in my case, I like to invent and that I like to play. Those characters that I invent always end up transforming me artistically and personally. I thought it was a fun name to think about how we behave and explore the concept of fiction as something authentic and legitimate. Ultimately, SDH has also helped me to explore and build all those people that I am or that I can become, but socially I have not been allowed to be. In this sense, understanding my own representation of sexuality in front of others has been fundamental for the creation of this character/person that, today, is still being built.

If you had to put your music into a drawer and print a label on it, what would it say?
Cruelly sexy electronic music.

Forget about genres for a second – SDH’s music sounds like …?
Music to cry in late night clubs.

What are your first musical memories?
Sergi: I’m a 90’s kid. The first CD I bought was Bleached by Nirvana with some money I literally stole from my parents. I guess that darker side of music has always stuck with me.
Andrea: I forged my first musical identity in the 2000s. I listened to emo, grunge, goth music and a lot of sad bands alongside mediterranean classics, copla, ballads in Spanish and folklore from my country. I guess I was a mediterranean emo kid, hehe.

Which person, artist or incident inspired you when you first started making music?
Sergi: I started playing music with friends in school, when I was 14-15 years old. I was into punk rock and skate videos but my friends were more into classic rock stuff so our first songs were kind of in the middle. It was just a natural thing for us, music has always been there, my dad used to play Springsteen all the time and I think I developed a taste for good songwriting. Experimental stuff came out a lot later. Andrea started playing music when we formed Wind Atlas in 2012. She was so shy in the beginning, it’s been amazing to see her bloom as an artist and singer.
Andrea: I started late. I used to write a lot, but it wasn’t until my mid twenties that I discovered that I had a voice. Discovering that I could sing those things I was writing opened up a world of possibilities. At first all my music was super influenced by all the literature I read, especially Spanish Baroque mystics and other poets. 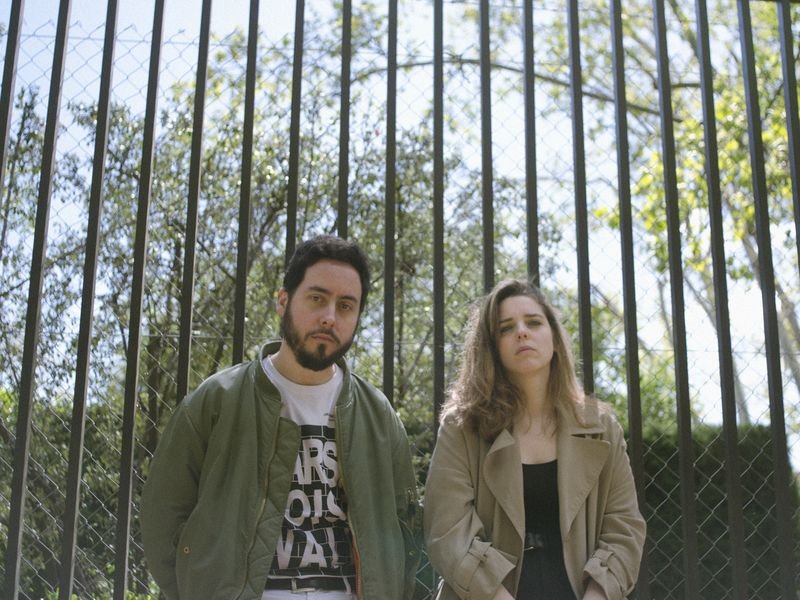 How does your compositional process work and how do you put your ideas together?
Andrea: We talk a lot and work on the ideas, it is a very informal process that comes out of casual conversations. Sergi does the music and if any of the songs he has made inspires me I use some words that I’ve already written. And other times I just try some words while listening. I guess there are more cerebral lyrics and others that are born more instantaneously depending on what has been around in my head those days.

Where does your inspiration for music come from? Which sort of mood produces the best songs?
Sergi: I used to believe in inspiration more in the past. Now I just work a lot, I try to work on music every day. Sometimes I just listen to what I’ve been recording lately, sometimes my head burns with ideas and I do more than one song in one day. I’ve been doing electronic music only for a few years now so I still have lots of things to learn. When you’re a self-taught person like me you spend time watching Youtube tutorials or googling production stuff you don’t know how to do. The way to get what you hear in your head is longer I guess. But it’s exciting to feel that you still have lots of things to learn. Of course, the mood in the room is important, we’ve been slowly building a small home studio and I like to work early in the morning, that’s when I’m more inspired.
Andrea: Sergi is a super hard worker. I have little time, so I write and compose in the subway, at work … and whenever I have a little bit of free mental space.

Which instrument will surely NEVER be heard on a SDH-track?
Never say never.

What kind of music are you listening? Any favorite bands/artists are you excited by at the moment?
Sergi: I’m not listening much music later, I’ve been recording lots of stuff myself I for some reason I cannot listen to much music when I’m working. Just random stuff like SPK, Hijokaidan, Coil, Autechre, Dj Screw, Kali Malone, Blood Incantation, Current 93…
Andrea: I’m obsessed with Caterina Barbieri. I love Yves Tumor. I also think Arca is one of the best things that happened to electronic music in recent years. And then the basics: always Coil, Current 93, Björk, Monte Cazazza, Chris and Cosey … 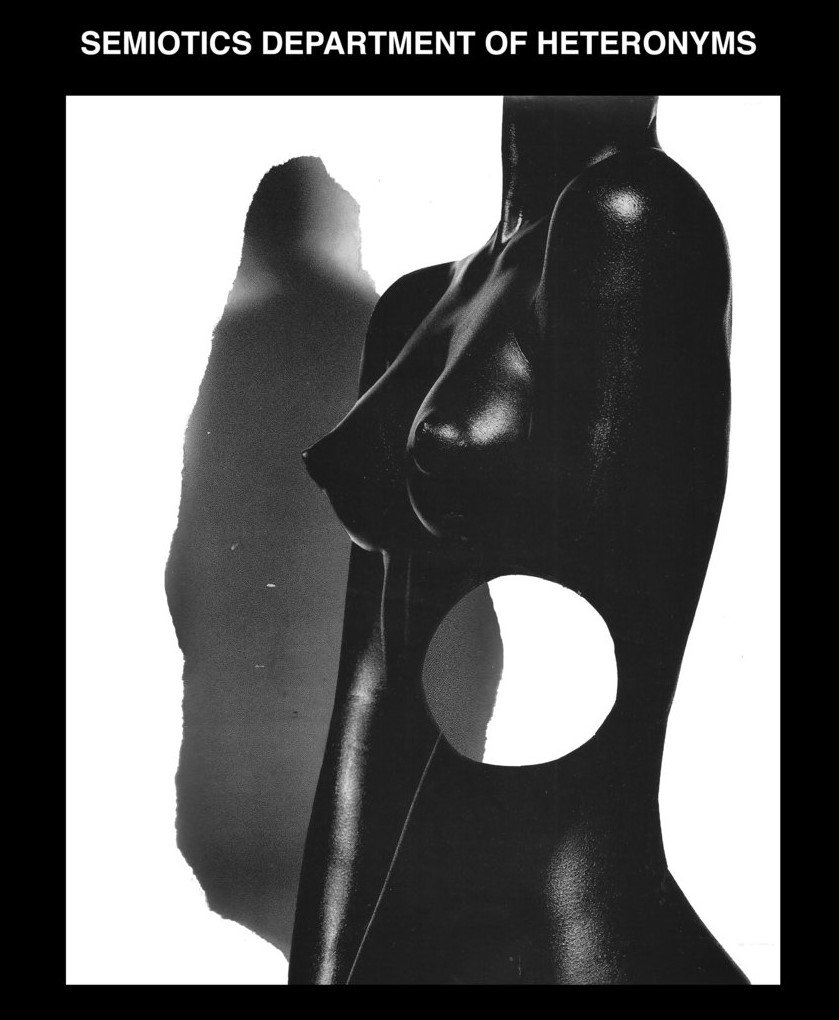 Last year your great debut Semiotics Department Of Heteronyms came out. Are you happy with the responses?
Sergi: Yeah, it’s our first album and we had the opportunity to put it out on Avant! Records. We’ve toured Europe and played a show in Canada. The energy at our shows is much better than when we started, I think we are a better band now. We’re thrilled about what’s coming next.

Your European tour is few months ago now. How are you feeling? Do you like touring?
Sergi: I love touring. I love getting to know so many different people and visiting so many cities that I probably won’t have the chance to visit if I was not on tour. And with SDH is so easy, being only the two of us, we can travel lighter and we don’t need much time for soundcheck and all that stuff so we can spend more time just hanging around.
Andrea: I have a complicated relationship with the stage. For many years I have suffered a lot putting myself in front of other people and singing in public. SDH has allowed me to express myself in other ways and now I have less fear and, sometimes, shows can become super cathartic for me. Dancing has a power in my mind that has helped me a lot in that regard. And definitely the best thing about touring is to meet a lot of nice people along the way. The bonds you create with other bands or with people who come to see you or book the shows are, for me, what makes all this worthwhile.

Any special plans for the nearer future? More concerts? Tour? Studio? Something completely different?
Andrea: Sure, you can expect new music and lots of shows for 2020. I think it’s going to be a wild year.